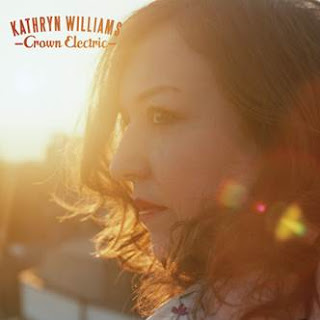 “This record is all about how time matters. It’s the most precious thing we have.” Kathryn Williams

Keen Elvis aficionados may spot Crown Electric as the name of the power company that employed the young Presley as a delivery truck driver before he got the call to record his first session at Sun Studios. Sixty years on, it’s also the title of the tenth album from Liverpool-born, Newcastle-based singer-songwriter Kathryn Williams - and her first solo record in almost four years.

It’s a suitably emphatic title for Williams’ most potent album yet, confirmation and summation of the songwriting skills she’s been honing since 1999’s Dog Leap Stairs. “As soon as I said it, the words in my mouth felt lovely,” says Kathryn. “It felt exciting and fresh but it also had the sound of a classic album. It has strength to it. It’s steadfast.” From the first song to the last, her lyrics have never been more astute, her melodies more memorable nor her arrangements more beautiful.

Kathryn plays an intimate show at St. Pancras Old Church on Thursday 1st August before embarking on her biggest UK tour to date during September & October (see below).

“I feel strangely giddy about this record,” she says. “I feel like I’ve hit a point in my writing where I don’t feel apologetic.” She mentions the opening line from Tequila: “Be brave enough to be yourself.” That’s what I’m trying to do with this record,” she says. “To feel all the doubts and do it anyway. It’s about coming to terms with where you are and what matters and being happy with your lot.”

One of Britain’s finest songwriters, Kathryn’s music has always challenged the distinctions between folk and pop. Currently enjoying the most prolific phase of her career, Crown Electric’s songs were narrowed down from a pool of 60 with the help of producer and long-time musical foil, Neill MacColl (who also worked with Kathryn on Two (2008) and 2010’s The Quickening). Crown Electric also boasts some stunning collaborations with Ed Harcourt (Darkness Light, Morning Twilight, Sequins) and James Yorkston (Arwen). What unites these songs is confidence, precision, grace and an eye for the small details that illuminate large ideas. “It’s about having a complex idea and then working out how to explain that simply,” she says.

In support of Crown Electric Kathryn will embark on her biggest UK tour for many years during September and October, as below – click on links for show details.