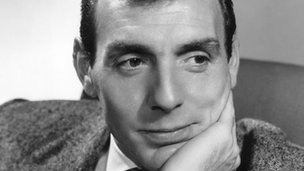 A blue plaque has been unveiled to mark the office comedian Eric Sykes shared with Spike Milligan for more than 50 years in west London.

Sykes enjoyed a career that spanned five decades and was still working on TV, film and on stage in his eighties.

The plaque was unveiled by his family at Orme Court in Bayswater, just after the one-year anniversary of his death.

Despite deteriorating health, Sykes could be seen on the West End stage late into his eighties and in 2005, starred in Harry Potter and the Goblet of Fire, before his death on 4 July 2012, aged 89.

The Heritage Foundation, which donated the plaque, said the Bayswater building was still listed as the registered address of Eric Sykes Limited and said three days before he died last summer Sykes told his agent Norma Farnes what he would like more than anything would be to visit Orme Court one last time.

Milligan, Sykes' friend and fellow comic and writer, who was best known for his work on the radio show The Goons in the 1950s, died in February 2002 at the age of 83.