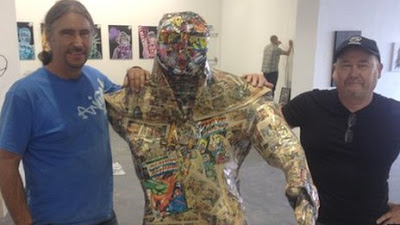 An artist who made a papier-mache sculpture from comics he found in a skip has found they could have been sold for about £20,000.

Comic fan Steve Eyre told artist Andrew Vickers the pages pasted to a leg were from a first edition of The Avengers.

Mr Eyre said the 1963 release, along with other rare comics used to create the artwork were worth thousands.

The sculpture, called Paperboy, was created for an exhibition at Sheffield gallery the S1 Artspace.
'Marble cheaper'

Mr Eyre owns the World Of Superheroes shop in Sheffield.

On discovering the valuable comics glued to the chicken wire frame, he said: "First of all I thought 'Fantastic' as, visually, it is a beautiful thing, but then as I walked round it, certainly on the inside right leg, there was a cover of Avengers number one.

"Then I started looking and there are six comics on this that together would be worth, even in the condition you can see, £20,000.

"It would have been cheaper for Andrew to make this out of Italian marble because the raw materials that have gone in to it I could have sold for a lot more than he is going to sell this statue for."

Laughing off the revelation, Mr Vickers said: "If somebody chucks things out in the skip they don't generally throw things out that are worth anything.

"To be honest I'm shocked but money has not got such a value to me. I think it is funny.

"I really love the idea of me creating something out of such expensive things that's worth less. I think it's brilliant."

The S1 Artspace show entitled Heroes organised by World Of Superheroes is running from 6 to 11 July.