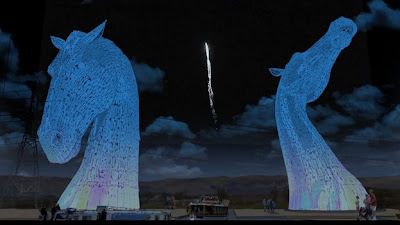 Computer-generated images have been released of the Kelpies sculpture between Falkirk and Grangemouth.

The construction phase of the £5m work has started, and is expected to be completed in mid-August.

The work is claimed to be the largest equine sculpture in the world and one of the largest pieces of public art in the UK.

The sculpture was commissioned as part of the Helix project, which is regenerating a strip of land in central Scotland at a cost of £43m.

The project is a partnership between Falkirk Council and Scottish Canals, and received a £25m grant from the Big Lottery fund.

The Kelpies will be visible from the M9 motorway and could be seen by up to 32 million people each year.

A video of images showing how the sculpture could look has been released by the Helix project.