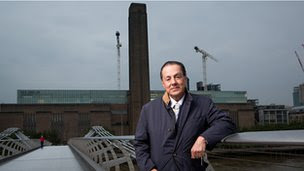 Tate Modern has received a £10m donation from Israeli shipping magnate Eyal Ofer towards the re-development of the gallery.

Construction is already underway on the new building that will be added at the south of the existing gallery.

The donation brings the total raised so far to 85% of the £215m costs.

In recognition of the gift, the exhibition galleries on Level 3 East of the gallery will now be called the Eyal Ofer Galleries.

Nicholas Serota, director of the Tate said he was "delighted" with the major donation.

"The generosity of Eyal Ofer and his family will help to make Tate Modern a truly 21st Century museum," he said.

The new building has been designed by Herzog & de Meuron and will be 11 floors high and the same height as the chimney on the original building.

There will be a larger space for temporary exhibitions, new seminar spaces and social spaces, including a public terrace on the top floor with views across London.