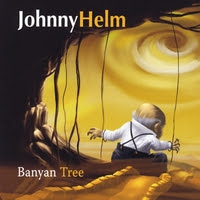 Johnny Helm was born to a musical family in the spring of 1973 in Hartford, CT. Nowadays he’s based in Hawaii, broadcasting and working the desk for various of the island’s top radio stations, and writing, recording and performing his songs. His musical career began in the mid ‘90s, initially in a band playing lots of Grateful Dead covers, before he moved to New York and cut a demo disc with the hope of securing a deal. When things didn’t work out, he upped sticks and moved to Honolulu, got a job in radio, and the rest, they say, is history.

All those years working in radio production must have provided invaluable recording experience, and that can be heard throughout “Banyan Tree”, a seven-track EP that plays to his strengths. Musically he sits somewhere between the rootsy AOR of Counting Crows and the new generation of songwriters who broke through post-David Gray – artists like Damien Rice and Ben Howard. Fortunately, he’s a talented songwriter with his own individual sound, one that’s relaxed and easy to connect with, which more than likely reflects his island habitat.

The collection begins with the title track, a clever, unhurried love song, full of natural imagery, and what sounds like a slow pedal steel adding dreamy ambience – a recurring effect. “You Better Give In” is equally laid-back, but here Helm adds some major hooks, and its radio-friendly appeal is undeniable. “Fine” revels in its fuller sound, and while it retains a gentle vibe, it moves forward with purpose, and contains a sublime guitar solo. Perhaps my favourite track is “I Was Ready”. Helm nails the song’s emotional targets, and the arrangement is unexpected and different.
www.johnnyhelm.com
www.facebook.com/Johnny-Helm
Johnny Helm CD Baby Page
Tony S.