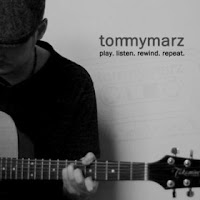 Tommy Marz earned his rock ‘n’ roll spurs fronting Detroit outfits Ease and Go To Zero. Both bands had a reputation for turning up their guitars and rocking hard, so when Marz released his debut solo album “Rival” in 2012, and it displayed his softer, more reflective side - including a cover of George Michael’s “Faith” (a YouTube smash) - it surprised many.

Now, just a year later, Marz has returned with a follow-up record, “Play. Listen. Rewind. Repeat”, a seven-track mini-album comprising of six original songs and concluding with a version of Prince’s “1999”; recorded live in the studio, quite simply with just an acoustic guitar and something jangly providing accompaniment. It’s a neat take on a song that we’re used to hearing with kitchen-sink production, and although it doesn’t hang around – it clocks in at a single second under two minutes – it would be easy to imagine it becoming as popular as the fore-mentioned “Faith”.

That’s all well and good, but it would be a shame if it deflected attention from Marz’s own songs, especially as he’s written some of the strongest material of his career. First track “Best of Me” is nigh on perfect. It reminds be a little of the classic pop tones of artists like Jason Faulkner and Matthew Sweet, who combine grown-up songwriting with infectious arrangements and hooks that can’t quite be dislodged. “Face to Face” is just as good and “A Kid In The 1980’s (White Adidas)” relives the decade in question with a litany of references, from Mr. T to “Hungry Like The Wolf” – and if it were released into a just and fair world, it’d likely be a massive summer hit.
www.tommymarzband.com
www.facebook.com/tommymarzband
Tommy Marz CD Baby Page
Phil S.