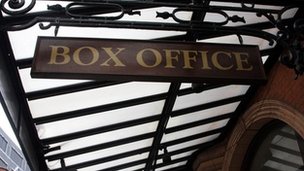 Almost half of London's small theatres feel "insecure" about their financial future and a third fear their venues could be sold, a study has found.

The London Assembly study spoke to 55 theatres with a capacity no greater than 300 seats.

More than 85% of them said they lacked rehearsal space and 34% feared the venue would be sold or converted.

The report urged the mayor to offer City Hall as a venue for rehearsals and called for a fund to be set up.

The six-month study, Centre Stage, said many of London's 105 smaller capacity theatres "face serious potential threats to their existence and may be at risk of closing".

It called on London Mayor Boris Johnson to appoint a new ambassador for small theatres.

The report also urged Transport for London to make it easy for small venues to advertise on Tube, rail and tram stations.

Many theatres said they failed to attract audiences because they relied on mailing lists and social media to market shows.

However, the majority of respondents said their ticket sales had increased over the past year, with only 20% noting a decrease.

Also three-quarters of the 55 venues surveyed said they need to significantly upgrade or repair their buildings but 93% of them do not have the required funds.

London Assembly Member Tom Copley, who led the investigation, said: "Beyond the bright lights of the West End, there are theatres all across London which play an essential part in the cultural life of the capital.

"However, it is clear from our survey that they are facing real difficulties at the moment and many feel insecure about their future. It would be a terrible loss to the capital if these venues were allowed to disappear."

Actress and comedienne Jo Brand told the committee: "Small is generally where you start, hence the preservation of small venues must be a priority, not just in London but country wide".

The survey covered a wide range of theatres, from the unfunded Finborough Theatre in Earl's Court to the Gate in Notting Hill, which is supported by Arts Council England.