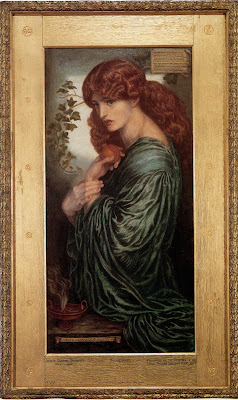 Proserpine by Dante Gabriel Rossetti, one of the defining images of the Pre-Raphaelite era, is to be auctioned at Sotheby's in London in November.

The drawing, in coloured chalks, comes to the market for the first time in more than 40 years and is expected to fetch up to £1.8 million.

"This is one of the most important British pictures to be seen on the auction market in many years," he said.

The drawing "represents the artist at the zenith of his originality", Toll continued.

"In many ways it stands apart from much of the art created by Rossetti's contemporaries as something new and otherworldly, that was unlike anything else that had been seen before it."

Proserpine was begun in 1878, and acquired by William Graham, the MP for Glasgow, in 1880.

The chalk drawing is among five versions of the image in existence, including three in oil and a watercolour replica.

The picture was last seen on the art market in 1970 when it was sold by the Stone Gallery in Newcastle-upon-Tyne.

No details are available regarding its current owner.

The painting centres on the myth of the goddess Proserpine, who was abducted by Pluto and trapped in the underworld after eating pomegranate seeds.

Each year she was temporarily released to return to her mother, Ceres. Her emergence from the underworld is said to symbolise the coming of spring.

Jane Morris, the Oxford-born wife of the artist William Morris and Rossetti's chief muse, was the model for Proserpine.

Biographers claim her own life bore similarities to that of the captive goddess, suggesting she was caught between a loveless marriage and her intimate relationship with Rossetti.

The exhibition opened at Washington DC's National Gallery of Art earlier this year and can currently be viewed at the Pushkin Museum of Fine Arts in Moscow.

Earlier this week, a painting by Sir Edward Coley Burne-Jones became the most expensive pre-Raphaelite painting ever sold at auction.

The sale easily outstripped the top estimate price of £5m and set a new world record for a piece by the British artist at auction.