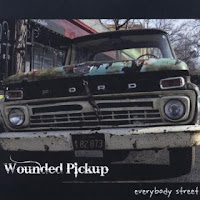 Californian singer-songwriter Tom Haithcock primarily formed Wounded Pickup to perform and record his songs – and “Everybody Street” is the fourth album they’ve released. Taking its title from a Dylan Thomas short story, the literary connotations obviously reference the seriousness with which Haithcock approaches his art, and the emphasis he puts on his words. When coupled with a group dynamic, both Haithcock and his songs retain their central significance, and “Everybody Street” remains a singer-songwriter album at its core.

The players that he’s surrounded himself with allow plenty of room for his songs to make their mark, and Haithcock’s a distinctive vocalist, with an earthy, weathered edge to his voice – perfectly matched to his own material. Songwriters like John Prine and Jerry Jeff Walker spring to mind, artists who blurred the lines between country, folk, blues and rock, and weren’t obsessed with clean lines and airbrushed production.

Listening to the opening cuts on “Everybody Street”, guitar strings are to the fore, and they elegantly sweep the listener along. “Turn My Love Up” is a vibrant, energetic launch track, with a winding slide providing lead, and a song that burrows deep. “Slippin' Away” is a stripped back, classic country tune with a contemporary alternative side, and “Mr. Muir” gets stuck into its narrative with relish. Later highlights include the folk tones of “Underground Arcade” and the stark openness of “So Many Days”.
www.tomhaithcockmusic.com
Wounded Pickup CD Baby Page
Tony S.