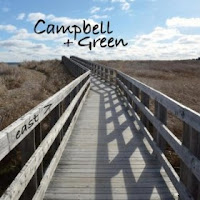 Canadian husband and wife duo Robert Campbell and Cailin Green relocated eastward from British Columbia to the Maritime province of Nova Scotia in the spring of 2012, and it was that move that provided much of the inspiration for their new collection of songs, which they’ve unsurprisingly entitled “East”.

The talented duo contribute to both the writing and vocals, and accompany their songs on guitar and keyboards. Here they’re joined by the experienced rhythm section of Jamie Gatti (bass) and Adam Dowling (drums), who add considerably to the listening experience, adding depth and drive to the couple’s upbeat songs. Indeed, the warmth of the group production, when coupled with Campbell and Green’s natural joie de vivre makes “East” a pleasure to listen to throughout its nine tracks.

Folk, pop, country, blues and jazz all play their part in the album’s make-up, and provide plenty of auditory variety. Both voices are high in the mix, placing emphasis on the songs. They begin with “Life Is a Beautiful Thing”, which sets out their agenda from the off, and Green’s vocal provides a perfect vehicle for the sentiments set out. It makes a genuine statement and their enthusiasm is infectious.

“Fish in the Sea” is a love song with plenty of their newfound marine imagery to propel the lyrics along. “Coyote” could’ve been written at the birth of the 1970s and wouldn’t have sounded out of place on an early Geffen Records sampler, and “Million Years” finds Green again in fine voice, singing over rhythms that may well have originated in Brazil.
www.campbellandgreen.ca
www.facebook.com/CampbellAndGreen
www.reverbnation.com/campbellandgreen
Campbell + Green CD Baby Page
Tony S.