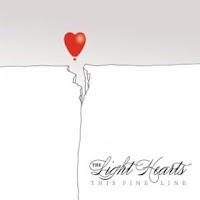 Before Connecticut siblings Brian Kiss and Suzanne Vick joined forces in The Light Hearts, both were established performers in their own right. Kiss is a soulful singer-songwriter with touring experience under his belt with Hot Rod Circuit, and the classically trained Vick won awards with her acclaimed debut solo album “The Brightness Of Orchids”. Their Light Hearts project should augment both their reputations.

They begin with the title track; Kiss takes lead vocal, and it’s an instant highlight. The positioning of Kiss’ rootsy acoustic guitar and vocal alongside Vick’s haunting keyboard, blurs all sorts of genre lines, and creates a unique perspective from the off. It’s followed by “Not the One You Want” – again Vick’s melancholy keyboards add depth and weight to the arrangement, and this time they divide the vocals, taking verses in turn. Singer-songwriter Seth Adam joins them on “Jane” to provide vocal support, but it’s the gentle, unhurried guitar groove they generate that most impresses.

Recorded live in the studio over a weekend in March 2013, the duo wrote all the songs on “This Fine Line” (apart from a cover of Bob Dylan’s “Boots of Spanish Leather”), played nearly all the instruments and co-produced the collection with local producer Kyle Ryan. Their hands-on approach to all aspects of their album is to be applauded, and simultaneously, their stripped back approach to their music does much to enhance their songs. I hope it’s an aspect of their sound that isn’t lost on future recordings.
www.facebook.com/TheLightHearts
www.reverbnation.com/thelighthearts
The Light Hearts CD Baby Page
Tony S.