Review: Tim Bertulli – Out Here In The Middle

Tim Bertulli – Out Here In The Middle (Independent) 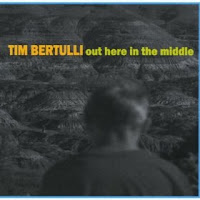 Originally from Ontario, and now based in Calgary, Alberta, Tim Bertulli is a singer-songwriter with a rootsy down-to-earth edge, and a lyricism which places him somewhere on a line that includes artists like Springsteen, John Hiatt and Steve Forbert. Indeed, if he were making his records in the final quarter of the 20th Century rather than the beginning of the 21st, he’d probably be referred to as one of the new Dylans.

It was a moniker that did many songwriters a disservice and Bertulli would have been one of them. The Canadian has built a career of sorts releasing a succession of albums – five in total – that have slowly and surely enhanced his reputation amongst a knowing, international crowd, though a genuine breakthrough release has yet to be forthcoming. Hopefully his latest effort “Out Here In The Middle” will open some new doors. Not only is it a fine collection of songs, but it rocks in a most satisfactory way, and contains a clutch of songs that are perfectly suited to grown-up radio.

UK audiences have already sat up and taken notice of earlier releases, such as 2011’s “The Rest Of Them Days”, and there’s no reason why this latest collection wont consolidate and further expand his position. It begins with the title track, a slow-cooked rocker, with an effected vocal and plenty of muscular guitar work. It’s an instant favourite and with a running time of over five minutes, it makes a persuasive and dynamic opening statement. It’s followed by “Be There Today”, a classic roots-pop song with the sort of hooks that’ll have to be surgically removed – should you ever feel the need.

He’s equally adept at slower numbers; “Wild Rose” being a case in point, and when he adds a little Stonesy strut on tracks like “(More) Mud in My Eye” and “My Way Tonite”, it’s a swaggering, forceful confirmation. I’d love to see him playing in my local venue…
www.timbertulli.com
www.facebook.com/Tim-Bertulli-Dyslexic-Love
www.reverbnation.com/timbertullidyslexiclove
Tim Bertulli CD Baby Page
Phil S.