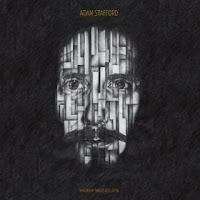 “Imaginary Walls Collapse” is the second album from Scot, Adam Stafford. Honing his style as a continuation of 2011’s “Build a Harbour Immediately” Stafford uses loops and repetition as his backdrop to which he adds melody lines and eccentric vocals.

The album opens well with the title track, a lightly motorik propelled indie number, and there are other moments of note such as “Sound of Fear Evaporating” - which includes Siobhan Wilson delightful tones, and programs its beats against bright afrobeat inflections, and there’s the pretty “Ghostly Arms”.

The tracks “Invisible Migration”, “His Acres”, “Vanishing Tanks” and “Cold Seas” use human beatbox to lo-fi / lo-budget effect. A creative idea that may have been overused and repeat listens may render them a bit of a novelty.