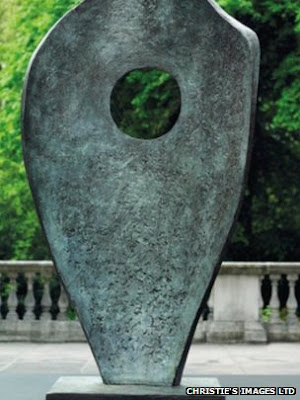 Work created by famous sculptor Barbara Hepworth more than 50 years ago has sold at auction for £2.4m.

The sale has beaten the previous record for work sold at auction by the artist which was almost £1.4m.

The piece is part of the Single Form series, which Barbara Hepworth worked on throughout her career.

The work which was signed, dated and numbered 'Barbara Hepworth 1961 1/7' was created at her studio in St Ives.

The sculpture had come from the collection of the late Leopold de Rothschild who acquired it in 1965 from Gimpel Fils, London.

The second secretary general of the United Nations, Dag Hammarskjöld, who died in 1961 had been a great admirer of the sculptor's work.

He had wanted her produce work for the new United Nations building in New York.

In 1961, when the United Nations commissioned Hepworth to make a sculpture in his memory, she began with Curved Form (Bryher II).

In 1964 she delivered her largest ever sculpture, Single Form, to the United Nations.

Barbara Hepworth moved to St Ives with her husband Ben Nicholson in 1939.

She became a leading light in the town's famous artistic community during its post-war period of international prominence.

Following her death in 1975, her studio was transformed into the Barbara Hepworth Museum.