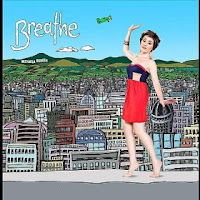 Michaela Burger is a classically trained singer, who also writes and plays guitar and piano. Originally from, and still based in Adelaide, Australia, Burger has toured and performed extensively in her homeland, Europe and South Africa, and “Breathe” is her debut album. Her choice of genre is very much pop, but she approaches her music with a maturity and dexterity that swerves the formulaic beats and teenage angst that dominates the charts and airwaves. That’s not to say that there isn’t a place for this sort of thing on the radio, but it’s literate pop music with a folk-rock edge, that’s aimed squarely at an adult audience, a style that many broadcasters choose to ignore – though that’s no reason for us pop loving grown-ups to miss out.

The album begins with real vigor. “My Heart Dropped to the Floor” sets the stage with Burger’s powerful soul-jazz voice taking the lead from the very start; its upbeat energy matched by her band-mates. “Every Day” calms the storm, though there’s a danger you’ll have to have the catchy chorus surgically removed, which is a recurring problem. Bolstered with what sounds like a string section “Get Away from Myself” might just be a perfect pop song. Its gypsy feel, ambitious arrangement and combination of a tenuous vocal and a self-doubting lyric hits the spot however many times it’s played.
www.michaelaburger.com
www.facebook.com/MichaelaBurger
Rob F.