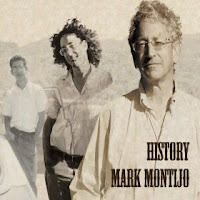 Mark Montijo began his career in the 1960s, performing his own songs in various clubs and on festival stages. He joined bands, played solo and lived the troubadour lifestyle until the late 1970s when other priorities took precedent, namely business and politics. He helped organise a small non-profit visual and performing arts foundation, and got involved in the management and expansion of a major regional museum. It’s not an uncommon tale; youthful musical aspirations giving way to real life and a regular wage packet. It’s less common to make a comeback after 35 years.

In 2011, Montijo was persuaded by musician friends and former fans to go into a studio and record some of his songs, both old and new. The project was completed in March, 2012, and in April the album was released. His sound can best be described as Americana, and it’s artists and songwriters like Guy Clark and John Prine that come most readily to mind. Montijo’s songs are measured and thoughtful, where every syllable counts. “Midnight Silence” provides an upbeat launch, a bona fide toe-tapper, but there’s a fine song underpinning the track, and a melody that sticks around long after its 3 minutes are up. Equally, the magnificently titled “Streetlights Street Fights and Saturday Nights” uses banjo and mandolin to propel the classic country themes. Throughout the collection’s fourteen tracks, Montijo’s voice is warm and inviting, as is the production as a whole. I suspect those musician friends of his have done him proud.
www.markmontijo.com
www.facebook.com/pages/Mark-Montijo
Rob F.