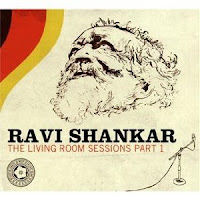 At nearly 92 years of age, in October 2011, Ravi Shankar invited long time tabla accompanist, Tanmoy Bose over to his house to “fool around” and with Kenji Ota and Barry Phillips on Treble and Bass Tanpura duties they recorded seven ragas. Four of these are presented in this first installment, and they incorporate a range of Indian Classical styles.

“Raga Malgunji” is a meditative raga that reflects on the distance between the human and the supreme. “Raga Khamaj” and “Raga Kedara” are brighter and marvelously expressive and presented in the romantic Thumri style. “Raga Satyajit” is an improvised melodic and rhythmic raga which is dedicated to and seemingly mourns the passing of film maker and personal friend, Satyajit Ray.

The technically brilliant musicianship and the collective experience of Shankar and Bose make for some highly complex, yet sublime, inspiring and intimate interplay between the pair.
www.eastmeetswestmusic.com
www.ravishankar.org
Willsk