Review: The Porchistas - The Baby Album

The Porchistas - The Baby Album (Independent) 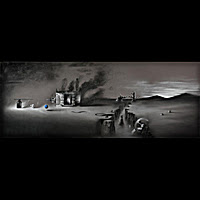 From Montclair, NJ, The Porchistas are an interesting proposition. They combine an accessible, retro, pre-hardcore punk sound with island vibes, folk-rock and a gritty New Jersey demeanour. They’re worldly and wordy, with plenty to say, but seem perfectly comfortable with the concept of big pop songs. Songwriters Adam "Devil Hands" Falzer and Alan "Sucia" Smith bring a wealth of experience to the project. Falzer’s studied Music Synthesis at Berklee School of Music, he sings, produces and plays lead guitar. Smith sings and strums an acoustic guitar, and enjoys making things out of shit and straw – houses I think, rather than boiled sweets. Drummer Jonathon Riordan and bass player Gerry Griffin complete the line-up.

As far as I can ascertain “The Baby Album” is the band’s third long-player, which they begin with “Friends in the Underground”. It chugs along like a well-bred Dead Boys’ number, with just enough sneer on the vocals and what sounds like a saxophone solo – and it’s catchy as hell. “Tooty Tooty Ta” is a Cracker-esque tree huggers call to arms that alternates between ramshackle country rock and rickety indie-cowpunk. Again, you will sing-a-long. “Make a Wish” reveals a Caribbean bent and “Zombie Jesus” wont makes friends amongst the faithful. “Frankly, You Can Thank Me” sounds like a title Morrissey might have come up with, but it’s nothing like a Smiths song. Instead it unwinds like a folky-post-punk Chili Peppers and I like it a lot. So a smorgasbord of sounds, styles and influences, yet it all comes together. I think I need to start checking out their back catalogue.
www.facebook.com/porchistas
www.theporchistas.bandcamp.com
Rob F.