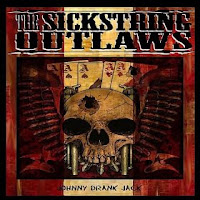 The Sickstring Outlaws is a San Diego based six-piece outlaw country band, led by Ron Houston (lead vocal, guitar) and Rizzy Rizborne (vocal, guitar). The pair started off a few years ago as an acoustic duo, but such was their popularity amongst local bar dwellers and country music fans that they wrote a bunch of songs, evolved into their current line-up, and in 2011 released their acclaimed debut, “Not So Bluegrass”. Now, just a year later they back with a sophomore effort, “Johnny Drank Jack”, on which they’ve neatly sidestepped any feared second album slump, and delivered a dozen songs, big on Merle Haggard, substance abuse and age-related sexual shenanigans. Of course, it’s all done tongue in cheek (not necessarily their own), and there’s much fun to be had.

They kick things off with “Old Saint Peter”, a rollicking country rocker about future expectations once the bucket’s been well and truly kicked. “I Like Merle Haggard”, you may or may not be surprised to hear, is a song about liking Merle Haggard (and getting stoned). In fact, singing songs that refer to musical heroes is a recurring theme, whether it’s Johnny Cash (the title track), or a whole gaggle of names on “Let 'em Know”. So, they’re definitely not shy about their influences, but they’re good enough to carry it off, and I suspect anyone with a soft spot for outlaw country, roots rock or Americana in general will find themselves listening to “Johnny Drank Jack” with a big ol’ grin on their face.
www.thesickstringoutlaws.com
www.facebook.com/TheSickstringOutlaws
Rob F.