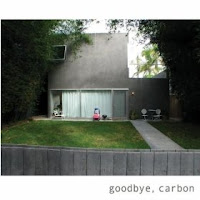 Goodbye, Carbon - Brad Miskell (vocals), Pete Min (guitars, bass), Carla Capretto (keyboards, vocals) - originally played together in the ‘90s in the New York band Drowned World. Min and Capretto then went on to front Travis Pickle, releasing several records before disbanding, though they continued to collaborate on various musical projects. Goodbye, Carbon is the latest, and the core members augment their line-up with a short guest list of musicians, providing serious strings – violin, viola, cello – percussion and programming. The result is beautifully layered indie-folk-rock that consistently emphasizes the importance of the song, and unerringly places it dead centre and front of stage.

There’s no shortage of genuine highlights. Both “Fall Into the Ocean” and “Golden Hour” indicate a willingness to provide literate, radio-friendly pop hooks when required, but they impress even more when they take on an unearthly mantel; “Phantasmagorical” is, as its title suggests, magical, with a captivating, eerie keyboard line stressing its otherworldliness. Best of all is “Then It Happened”. Capretto takes lead vocal, and her delivery when combined with orchestrated etherealness is nothing short of perfection; timeless though strangely out of time. Had it been released sometime in the 1980s, they’d be signed to 4ad and John Peel would’ve been booking them for a much-anticipated session.
www.goodbyecarbon.com
www.facebook.com/thegoodbyecarbonpage
www.goodbyecarbon.bandcamp.com
Rob F.