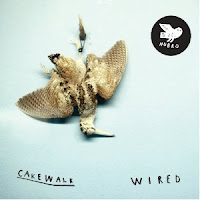 Cakewalk is a Norwegian improvisational power trio, comprising: Oystein Skar - synths, Stephan Meidell – guitar and bass and Ivar Loe Bjornstad – drums. Like many improv musicians they like to rid themselves of the reassurance of any comfort blanket , which means that between them they work, or have worked, with a myriad of other artists and groups including Sacred Heart, Highasakite, the Sweetest Thrill, Hedvig Mollestad Trio, Glow, Krachmacher, Vanilla Riot and the Hilde Marje Kjersem Band.

For their debut they attack the tunes with a sparing but rugged and hard-hitting approach, which splutters with electronic turmoil with krautrock and post-rock both asserting their obvious influence.

To take you on a guided tour:
The calculated bass / drum groove of “Glass” houses stabs of freely angular guitar, caustic modulations and simple synth phrases of the horror soundtrack then from the sawn cymbal and grimy droned intro of “Descent” it’s step after step down into Hades.  The intensity and claustrophobia exhibited in “Soil” encapsulates the feeling that one would have if they resigned themselves to being buried alive and the suicidal endurance of “Perpetual” pits its brutal wits against Sonic Youth psych-drone guitar abstractions.  The title track is an Amphetamine fuelled free-jazz / post-punk frenzy and then, from its two chord drawl draped over a muffled claxon beginnings, “Kammer” draws us to an almost anthemic close.
www.hubromusic.com
Willsk