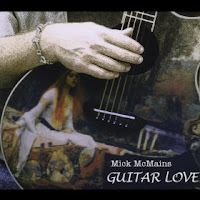 Though born in Washington DC, Mick McMains spent his early years in Saigon, Vienna and Paris. In the latter capital he took piano lessons from a Russian-born protégé of Nadia Boulanger (if you haven’t heard of her, she’s well worth a Wiki) and when his family moved back to Southern California, he began to play guitar. A talented singer and musician, apart from a career that’s seen the release of a series of solo recordings – “Guitar Love” is his sixth CD – he’s toured Europe as bassist with punk band The Generators, spent two years as vocalist for Earl Slick’s band and is involved with art ensemble DJ Monkey, co-producing two of their albums.

So, usually a tricky artist to pin down, but on “Guitar Love” he concentrates on his own songs, penning 12 of the 13 tracks and focusing on a style that might best be described as Americana. Although it’s not quite as simple as that. Elements of classic rock, blues-rock and AOR are utilized and right at the death a traditional Chinese song makes an appearance. To be honest it’s not McMains’ finest moment on the album, but there are plenty of highlights, from the opening title track, truly a paean to “six strings on a block of wood”, to the Wilburys-esque “Endless Sky”. Fans of literate, grown-up pop songs could do a lot worse.
www.mickmcmains.com
Rob F.