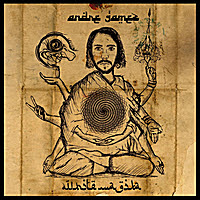 Andre Gamez was born in Guatemala City in the late 1980s. He started playing guitar at an early age, and joined several bands while still in his teens. By the time he was 20, he was singing, playing guitar, bass, mandolin and drums, and had begun recording, mixing and producing his own music. Success came at 21 when, with Uty Roldan, he formed a psychedelic rock band called Republi-k, who went onto to play over 400 shows together, releasing two EPs and an album, and made appearances on television, radio and in magazines. Now releasing records under his own name, his talents as a singer-songwriter, multi-instrumentalist and producer can be given free rein. He doesn’t disappoint.

“White Magika” is his third solo release (“Untitled Orange Book”, a seven track mini-album came out earlier in the year, and prior to that there was an EP release) and it provides a showcase for Gamez’ psychedelic approach to contemporary rock. He lists Pink Floyd and Led Zeppelin as influences, though “White Magika” isn’t as spacey as the former, or as bombastic as the latter. It’s very much a song-based album with an emphasis on melodic structure. He’s a fine guitarist; on “A Fool's Spell” his precision is admirable and contrasts beautifully with the flyaway vocal. “Days of the Blood” applies an industrial sheen but not at the expense of emotion, and “Black Silhouettes” isn’t unlike second phase Cure jamming with Jane’s Addiction.
www.andregamez.com
Rob F.