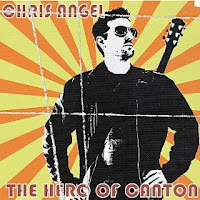 Chris Angel paid his dues playing assorted bars and pubs, solo, in duos and in bands. Sensibly he simultaneously got a degree in music performance at the University of Windsor, in his home state of Ontario. Though rooted in Celtic and Irish music, he’s unafraid to mix things up some, and on his third long player “The Hero Of Canton” we’re made privy to a host of folk influences, from contemporary English singer-songwriters to the New York tradition.

It all comes together very well. Angel is a fine musician and singer, and delights in telling a tale. He kicks off the collection with a cover, a stripped back version of Billy Joel’s “Downeaster Alexa”, which he follows with “These Deep Lines”, a song with depths I’m unable to fathom, but it keeps me hooked to the very end. “In the Water I Am Nameless” possesses an intriguing title and the mystery seeps into the song, complete with Peter Gabriel-esque backing and more than enough ambiguity to keep us all guessing. Bolstered with a scattering of traditional material, “Mingulay Boat Song” and “The Parting Glass”, “The Hero Of Canton” may not be Angel’s definitive statement, but it’s a major step on his journey.
www.chrisangelmusic.com
www.chrisangelmusic.bandcamp.com
Rob F.