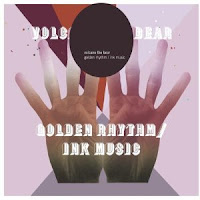 Leicester’s experimental / improv heavyweights add to their prolific output with what has been described as “a calculated hysterical melting pot of This Heat, Robert Wyatt, Faust and The Residents, of musique concrete and ethno-folk, all seen through a prism of theatrical improvisations and unhinged set pieces.”

Eclectic, eccentric, bizarre and absurd are terms that define their sound and are embraced with an apparent sense of humour. Recording everything they do, most of the works presented are existing recordings that are recontextualised by over dubbing and editing.

Either side of the brash and chaotic interlude of “Bravo” and “Quiet Salad” and the aural equivalent of a car crash in reverse that is “Spurious Ruga” drum and guitar interplay between Daniel Padden and Aaron Moore are the driving force to which sonic embellishments are sewn. Terms of reference and influence segue in and out of focus, whether its mariachi music, flamenco hand claps, Morse code, slack tuned sitar, junkyard rhythms, sci-fi soundtracks or appropriations of African thumb piano. “Baby Photos” is a deranged and percussive highlight.  Elsewhere “Golden Ink” has a kind ornithological free-jazz essence akin to Basil Kirchin’s “Quantum” and “Fireman Show” is almost a slow burning rocker. Wildly entertaining.
www.myspace.com/volcanothebear
www.runegrammofon.com
Willsk