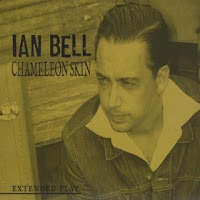 Originally released in 2011, Ian Bell’s “Chameleon Skin” was the English born / California-based singer-songwriter’s five-track debut release. Chronicling a years worth of material, Bell writes wordy, lengthy songs that hang together like a collection of short stories, where individual verses tell a tale before morphing into something new but connected at the root. Four of the five songs clock in at over five minutes long, and each is crammed with verbose detail. His influences seem mostly British, with artists like Roy Harper and Richard Thompson near the top of the list, though there’s little in his sound to link what he does to any particular time.

“Chameleon Skin” begins with the title track, where Bell relays a tumble of striking imagery; a mother’s bathtub suicide and a daughter with a feather in her hair both remain ensconced, and though underpinned with sadness, the mood is one of regretful renewal. “Sharks” is just as desperate, with the sea, its dark depths and titular man-eaters cranking the levels of tension, despair and hopelessness. Musically sparse, Bell keeps the backing simple and raw, with just guitar and occasional harmonica, and his voice, weighed down with poignancy and fraught tenderness, all adding considerably to the mood.
www.ianbellacoustic.com
Rob F.