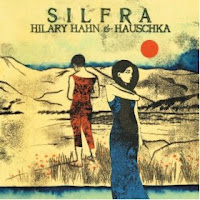 “Silfra” is named after a geological fault-line near Reykjavik, Iceland where the Eurasian and North American tectonic plates meet. It stands as a metaphor for the musical meeting of minds of double Grammy-award winning American violinist, Hilary Hahn, and German experimental composer, Hauschka (aka Volker Bertelmann).

Reaching out from her classical roots for pastures more avant-garde, Hahn improvises playfully whilst Hauschka (quite literally) gets inside his prepared piano: contorting, bowing and banging the strings, and extracting percussive notions from every metallic or wooden pore.

Together - with the immaculate production of Valgier Sigurõsson (who has previously worked with Björk and Bonny ‘Prince’ Billy) the pair wring and beat out affectations of folk and classical music from a variety of continents whilst the experimental bent adds a mechanical angle: titles of such tracks as “Kraków” and “Clock Winder (Before Stroll)” attesting to this.

To Hahn’s folkloric melodies and minimalist constructs on “Adash (Before Clock Winder)” Hauschka displays an ability to single-handedly create the rest of a driven chamber ensemble – which besides keys offers a pastiche of bass, drums and tuned percussion.

The elongated, “Godot” ebbs, flows and smoulders throughout and draws in Appalachian notes with the hammered dulcimer-like simulations. The duo’s chemistry and “Bounce Bounce” playfulness makes for a conceptually broad - at times minutely focused, and at others, a far reaching album.
www.hauschka-net.de
www.hilaryhahn.com
Willsk