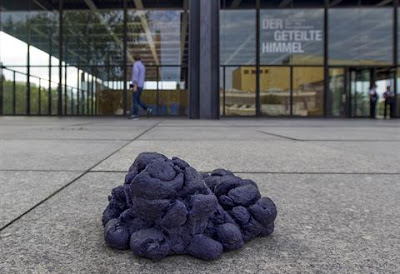 An installation made up of artificial dung, intended to pay tribute to a seminal work seized by the Nazis in 1937, has gone on display in Berlin.

Each pile corresponds to one of the horses in Franz Marc's seminal work The Tower of Blue Horses.

The expressionist masterpiece was branded "un-German" by the Nazis and has never been found.

The aim of the piece, according to Berlin's New National Gallery, is to make it seem as though the horses are alive and trotting around the museum.

"What would happen if the painting still lived, if there were a sign of it, and the horses were to come by here?" said Dieter Scholz, the gallery's curator.

Marc's painting was bought in 1919 by Ludwig Justi, the director of the New National Gallery, and was part of the museum's collection until its confiscation.

Like many works that went missing during the period, it is not known if The Tower of Blue Horses still exists or has been destroyed.

Prior to 1949 there were various sightings in Germany and there were unconfirmed reports it had been stored in a Swiss bank safe.