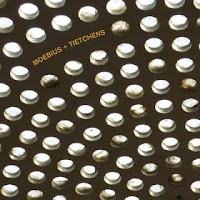 2012 sees the release of this collaborative work between Dieter Moebius and Asmus Tietchens, which was suggested as a parting gesture following Moebius’ 1976 Liliental project (which included Conny Plank, Okko Becker and Helmut and released in 1978). Considering Moebius’ prolific output and well earned reputation as a serial collaborator it’s quite surprising that their paths have not crossed in 35 years.

Since the early ‘70s and Kluster, Cluster and Harmonia, Moebius’ appetite for electronic experimentation has not waned and Tietchens, since 1976, has been an avid recorder of electronic music, musique concrete and more recently abstract music. The 13 tracks are quite wide ranging stylistically and move freely between the space-age landscape of “Vincent”, to the angelic “Fontenay”, the quirky epic “Lange Reihe”, the sampled water works of “Raboisen”,  the Industrial “Im Windkanal”, the heavy metallic-phased “Grimm”, the glitch opera of “Plan” and the wavering “Mach Auf!”

The lengthy “Kattrepel” is slightly nostalgic with its driven, repetitive groove and the dentist’s drill-like piercings would no doubt rid you of unwanted felines (sorry, couldn’t resist…).

As you can see pretty diverse but a couple of tracks of note are “Thorax” which seems to compress a New York taxi horn into its hip-hop motif and “Yes, Yes” which muddles Congotronics with bubbling squelches and electro-fluid.
www.dietermoebius.de
www.tietchens.com
www.bureau-b.com
Willsk