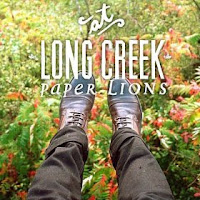 Paper Lions (formerly the Chucky Danger Band) are a Canadian indie-folk-pop quartet with a history that goes back to 2004 when brothers John and Rob MacPhee joined up with neighbour Colin Buchanan and school friend David Cyrus MacDonald. Originally from a village on Prince Edward Island called Belfast (a community historically known for rioting and golf courses rather than producing popular beat combos), they’re now based in Charlottetown, the island’s provincial capital and main population centre. I can’t imagine it’s an ideal location for the propagation of a career in popular music, but so far it doesn’t seem to have done them much harm. They’re regular nominees and occasional winners of various national music prizes, they performed at the 2010 Winter Olympics in Vancouver and they’ve toured with Cake, Hot Hot Heat, Bad Religion and many more.

Their latest record, the six-track “At Long Creek” should gain them more friends and fans. They tap into the new folk tradition with gentle ease, finding their niche somewhere between Fleet Foxes and Mumfords. Lush melodies and delicious harmonies abound, with lead vocalist John MacPhee providing many top-end thrills. They’re keen songwriters, too. “Ghostwriters” opens proceedings; its stop / start arrangement is strangely coherent and it flows without pandering to expectations. “Little Liar” is just perfection personified, from the very first line. Fine playing, a great tune, a song with bite and a masterful hook. “Bodies in the Winter” is fuller and just as appealing, and references both Vampire Weekend and Crowded House without compromising their own unique personality.
www.paperlions.com
www.facebook.com/paperlions
Rob F.