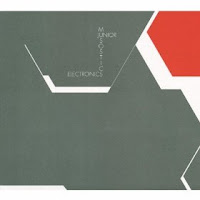 There is a breed of musicians that are thoroughly inspired by, and strive to reach, the same musical and / or lyrical majesty and inventiveness of the Brian Wilson / Van Dyke Parks collaboration. The High Llama’s Sean O’Hagan could be instantly recognised as one such musician and following branches of the musical family tree, it doesn’t take too long to arrive at Junior Electronics.

Junior Electronics aka Joe Watson has played keyboards with Stereolab since 2004 and has worked with Sean and The High Llamas in a musician / engineer capacity, and this high melodic and harmonious benchmark has filtered through into “Musostics”. The second solo album under the JE tag, Joe again takes his playful pop creativity and overt musical influences and combines them with high art concept. It takes mesostics  - where vertical textural phrases intersect horizontal lines of text - as the conceptual basis and applies to the music’s large scale splicing. John Cage was a frequent exponent of the method and to this end Junior Electronics follows in his experimental footsteps. On ‘Musostics’, Joe is joined by Imitation Electric Piano’s Mary Hampton, Isidore Guild, Alan Hay on vocal and lyrical duties with Grant Allardyce on drums. There’s occasional backing Stereolab’s Laetitia Sadier.

The set, operating under the constraints of the self-imposed / invented musostic concept means there are some musical digressions and encounters with the oblique which provides some scope within its confounds. It brims with analogue clicks, beeps, belches and swathes, fanciful vocal delivery and the arrangements are incredibly precise, bright, idyllically psychedelic and glossy.

Highlights are “Intimations” with its lush vocal harmonies, which counter a metronomic bubble gum pop and the grandiose but fragile "Fire Island Sand".
Although fans of Stereolab and High Llamas will surely find a ready affinity, there’s room for comparison – thus scope to appeal to Gruff Rhys / Super Furry Animals and 70s Pink Floyd fans too.
www.myspace.com/juniorelectronics
www.bureau-b.com
Willsk