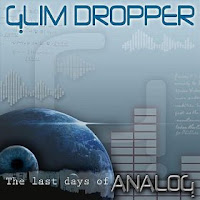 Glim Dropper is a three-piece band from Philadelphia, comprising of Dan Kauffman (vox, bass), Ben Geise (guitar), and Rob Schnell (drums). They take their name from an infamous con that involves a one-eyed man and a spectacularly gullible mark, which is the sort of detail that everyone likes when they’re getting to grips with a new band. Not that Glim Dropper is a completely new proposition. They’ve one earlier long-player under their belt called “A Human Condition”, recorded when they were known as the Dan Kauffman Band, an album that was completely written by Kauffman. Their new moniker reflects a greater songwriting contribution by his band-mates,

“The Last Days Of Analog” is the sort of contemporary rock record that’s just a couple of lucky breaks short of becoming huge, as over eight tracks, the band really don’t put a foot wrong. They mix up a variety of approaches and styles with an ever-present rhythmic thrust and plenty of pop nous. I suppose The Police are an easy point of reference – there’s three of them, they’re not shy incorporating a little reggae into their sound and they’re radio friendly – but they’re no where near as affected as Sting and his cohorts, and they’ve a greater range of styles to call upon. From the lolloping groove of “March” to the grungy post-punk rock vibe of “Williamsport”, Glim Dropper make everything they do accessible and user-friendly. Seriously, a little bit of good fortune and a family size bottle of peroxide and they’d be massive.
www.glimdropper.com
www.glimdropper.bandcamp.com
Simon M.