Review: Curse In The Woods - The Deals They Made

Curse In The Woods - The Deals They Made (Independent) 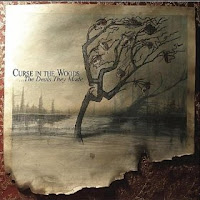 A year after their debut EP, Quebec band, Curse In The Woods, have released their debut full-length record. Originally formed when accordionist Sam Harvey met visual artist and burlesque performer Jeannie Taylor at a Montreal metro station, the pair bonded over a shared musical vision and quickly augmented their embryonic group with various other talented musicians. The result is a sound that includes and incorporates all sorts of wildly different, though complimentary styles, from European gypsy jazz to North American folk and blues. Perhaps what impresses the most is that for all the inherent complexity of their chosen musical path, they retain an exuberance and raw enthusiasm that captivates and charms, and is quite addictive.

Currently a seven-piece band, including serious strings; violins and double bass, plus brass, keyboards and musical saw, Curse In The Woods maintain an affection for strong songwriting, and artists like Tom Waits and Leon Redbone come to mind on tracks like “Perfect Lawns” and “Walking in the City”. On “Rains Is On Its Way” all their quirky Parisian mannerisms are exposed to fine effect, with Taylor’s slightly vulnerable Billie Holiday-esque drawl drawing a direct line back to a tradition that belongs in a different age. Over a short period of time they’re earned themselves a reputation as a dynamic live attraction on their local Montreal scene. There’s very little chance of my witnessing them on a club stage anytime soon, but “The Deals They Made” captures their essence and provides much pleasure by proxy.
www.curseinthewoods.com
www.facebook.com/CurseintheWoods
Rob F.