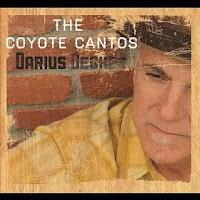 Darius Degher may not be a household name, but that’s not through lack of talent or effort. Indeed, the most cursory glance at his CV indicates a singer-songwriter with Zelig-esque qualities. Over the years, he’s shared stages with REM, Don McLean, Lucinda Williams, Los Lobos, Dr. John, and Guy Clark. In the ‘80s he led Paisley Underground outfit Darius and the Magnets, released an acclaimed solo debut album, “Cardboard Confessional”, and played sitar on Warren Zevon’s "Sentimental Hygiene" record. After relocating to Sweden for a decade or so, and recording an album with his new band Burning Bridges, he made his way back to California, which brings us to his latest recording, and his first album for eight years, “The Coyote Cantos”.

It’s difficult to believe our paths haven’t crossed before, but as the saying goes, better late than never. “The Coyote Cantos” is very much a singer-songwriter album, with Degher’s rootsy voice to the fore. The production is bright and full, and the arrangements supply plenty of hooks. Opening cut “Edge of the Western World” is the perfect start. Guitar and keyboards come together like something from a classic mid/late ‘60s Dylan record, and a killer chorus wedges the song deep in the subconscious. He likes to tell a story, too. “The Ballad of Bob and Oblivion” is a wonderful title with a song to match, and “The Gas Station Lady” is a banjo-propelled tale of alien abduction and some intergalactic probing. If it weren’t for the fact that he’s 30 years into a career, I’m sure there’d be a call to label him the next Bob Dylan, as it’s similarly branded songwriters like John Prine, Steve Forbert and Elliott Murphy that come to mind. That’s good company to keep, and I’m sure fans of the above trio will find much to enjoy in Degher’s brand of literate Americana.
www.facebook.com/pages/Darius-Degher
www.reverbnation.com/dariusdegher
Rob F.