Ricky Z. - The Long And Dusty Road (Over Yonder Records) 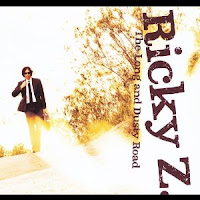 Ricky Z. – I’ve no idea what the ‘Z’ stands for – is a much-respected guitarist, composer and producer. In a career that has seen him working with artists as diverse as Micheal Bublé, Gloria Estefan and Lauryn Hill, he’s now taken the opportunity to record and release an album under his own mysterious name. Inspired by some of the great guitarists, such as Eric Clapton, Rory Gallagher and Freddie King, he’s crafted a record that is very much rooted in the blues tradition but it’s a contemporary version, which incorporates a host of associated styles, from funk to Cajun.

The respect in which an artist is held can often be judged by the company he keeps, and on “The Long And Dusty Road” Ricky is joined by several heavyweight musicians, including Bill Champlin, Lisa Kekaula (the BellRays) and keyboard whizz, Ed Roth. It’s not a particularly long album, just seven tracks long, but it feels just right. The different vocalists each bring something new and unique to the recording, and Ricky plays some wonderful blues guitar. There really isn’t an ounce of filler to be found, but if you’re looking for a couple of recommendations then first of all check out “No More”, the sort of slow burning blues rock that Roy Buchanan made his own, and features an inspired Bill Champlin vocal. For another perspective, try and hear the rockin’ “Back Where We Belong”. It chugs along in a fine fashion, and wouldn’t sound out of place on a classics radio station or one of those fancy TV advertised rock ‘n’ roll compilation box sets.
http://www.rickyzonline.com/
https://www.facebook.com/RickyZonline
Rob F.