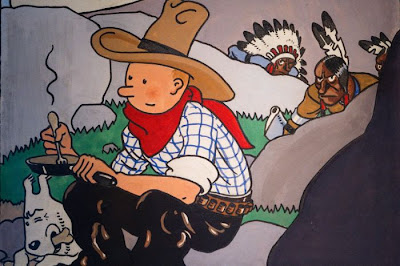 The Tintin in America cover, hand-drawn by Belgian writer and illustrator Herge, broke the record - set by the same item in 2008, when it sold for 764,000 euros.

It shows the young adventurer Tintin, dressed as a cowboy and sitting with his dog, Snowy, as axe-wielding American Indians creep up on them.

It was bought by a private collector.

The Indian ink and gouache drawing work is one of only five remaining such works by Herge - real name Georges Remi - who died in 1983. Only two of those are in private hands.

The buyer is anonymous but he was represented at the auction by a friend identified only as Didier.

"If he'd have been able to get it for less I think he would have been happy," Didier said after the sale, according to news agency Reuters.

"The aim was not to beat a record; the aim was to obtain the work, before anything else... You don't come here to beat the world record, to spend money, that doesn't make any sense."

Saturday's sale was part of a rare larger sale of Tintin memorabilia, reportedly including draft sketches of Tintin and a copy of Explorers on the Moon, signed by the first men to walk on the Moon, Neil Armstrong and Buzz Aldrin, and fellow astronaut Michael Collins.