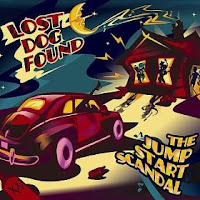 Lost Dog Found is a retro swing jump blues band, based in San Francisco, but guaranteed to raise a ruckus wherever they’re heard. Led by guitarist Stevie Mac, the band, all seven of them, let rip on their debut long player “The Jump Start Scandal”, which features an impressive track listing that’s comprised of no less than 11 original songs.

They begin with “Tear Up the Floor” with guitarist Mac and trumpeter Adam Borden combining beautifully to cook up a ‘50s noir setting for vocalist Chris Hudlow’s after hours delivery (he’ll solve the mystery and get the girl – but you know she’s going to turn out bad). It’s followed by the goodtime “50 Things I Love About a Woman”, which wisely turns out to be just about everything, and the slower “Turn Me On” offers clues as to why they were Jango’s number one indie blues band for a third of a year.

Swing revivals may come and go, but while there are bands out there as good as Lost Dog Found, it’s a genre that will continue to live, breathe and thrive. In fact, these guys would go down a storm on the UK Americana circuit, and I hope they make a trip over sooner rather than later. Until then we’ll just have to be satisfied with their record, and however much I’d love to see them do there thing live on a local stage, I know I’ve got the next best thing right here.
www.lostdogfound.com
www.facebook.com/ldfband
Rob F.