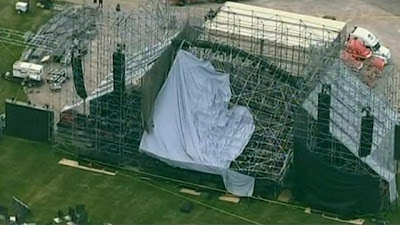 One person has died in a stage collapse before a Radiohead concert in the Canadian city of Toronto.

Three others were injured, one seriously, in the incident at Downsview Park, medical officials said.

The collapse happened an hour before the gates were due to open for the concert, with queues already beginning to form outside.

UK rock band Radiohead tweeted that the performance had been cancelled due to "unforeseen circumstances".

Emergency crews went to the scene and the area was evacuated.

Police said the person who died was a man in his 30s, but did not reveal his identity.

The victims were all part of a team involved with setting up the stage, officials said.

Alexandra Halbert, who was working in a beer tent at the show, said she was about 200-300 yards away from the stage, with her back to it, when she heard "something that sounded like fireworks".

"I turned around and the whole top part of the stage had collapsed, as well as the scaffolding," she told the BBC.

"It seemed like there were a couple of minutes of hesitation and no one knew quite what to do. It was only afterwards that we all realised how serious it was."

Jason Ip, a food vendor, said there was "chaos" as people waited for the emergency services to arrive.

"A few people started running towards the stage. No one knew exactly what had happened, but it was clear that people were underneath the stage," he said.

"It was like witnessing a car accident. In a situation like that, you just aren't sure how to react."

Some 40,000 people were expected for the sold-out gig, which was also due to feature Canadian musician Caribou.