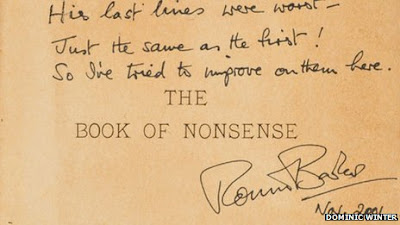 A book of Edward Lear's limericks that comedian Ronnie Barker changed to make funnier has sold for £3,600 at auction.

The Two Ronnies star wrote his own versions of the poems alongside Lear's in The Book of Nonsense, first published in 1846.

Dominic Winter Auctioneers said it had been bought by a private buyer at the sale in South Cerney, Gloucestershire.

Ronnie Barker, who died in 2005 aged 76, was apparently disappointed by the poet's use of the same word at the end of the first and last lines, so made his own additions.

Among them was an introductory limerick he wrote, calling the verses "boring and drear".

It reads "There was an old fossil named Lear, Who's verses were boring and drear. His last lines were worst - just the same as the first! So I've tried to improve on them here."

The auctioneer's website described the book as, "an extraordinary and unique item, associating two British masters of comic language and wordplay."

The buyer was a private collector from Scotland, the auctioneer said. 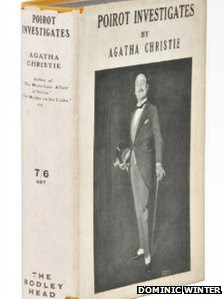 At the same sale a 1924 first edition of a collection of short stories by Agatha Christie, Poirot Investigates, was sold for £34,000.

Auctioneer Chris Albury said: "We knew it was a very, very rare dust jacket featuring a picture of Poirot, and we couldn't find an example of the book with a jacket ever having come up at auction before.

"But it proved to be even rarer than that, and most of the specialists had never even seen one in decades of dealing."