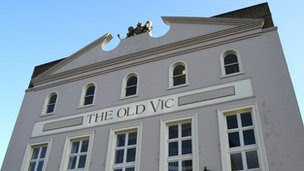 Thirty-four arts and heritage organisations across England are to share £56 million of public money to help them build endowment funds.

The Catalyst programme is designed to encourage greater charitable giving to arts groups.

The Old Vic theatre and the Victoria and Albert museum were among the big winners, with each receiving £5m.

Smaller organisations have also been successful, though the scheme was heavily oversubscribed.

In order to access the money, the organisations must now raise at least double the amount they have been given.

The Arnos Vale Cemetery Trust in Bristol is getting £500,000 to help secure a site that local people saved from commercial development.

In County Durham the Bowes Museum in Barnard Castle will receive £1m towards a project aimed at supporting its collections of fine and decorative arts.

Manchester's Halle Orchestra has been allocated £1m of funding, subject to fundraisers reaching a further £1m target to help fund a new base for rehearsals and community projects.

Chief executive John Summers said it was "amazing news for the Halle and its audience, our youth choirs and orchestras, and all of those children and community groups that will use the new Halle Centre".

The Catalyst: Endowments programme is a joint initiative between the Department for Culture, Media and Sport (DCMS), Arts Council England and the Heritage Lottery Fund.

The programme offers matching funding to help arts and heritage organisations become more sustainable and resilient by building a new endowment fund or developing an existing one.

The successful organisations will use grants of between £500,000 and £5 million to attract money from private philanthropic sources.

"It is very gratifying to see that so many have already been successful in attracting match-funding."

Applications were assessed by an independent panel chaired by former Conservative cabinet minister Michael Portillo, with final awards made by the National Council for Arts in England and the Board of Trustees of the Heritage Lottery Fund.

The money awarded to the Victoria and Albert will be used to support its ambition to build a £100m endowment over the next 15 to 20 years.

Other successful organisations include Birmingham Royal Ballet, which has received £1m to help support young dancers, and the Serpentine Gallery in London's Hyde Park, which has secured £3m.

Arts Council England has awarded a total of £30.5m to 18 groups, while 16 organisations have received a total of £25.5m from the Heritage Lottery Fund.