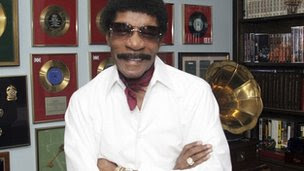 Herb Reed, the last surviving founding member of the US vocal group The Platters, has died in Boston aged 83.

The singer's manager said he died after a period of declining health that included chronic heart disease.

Founded by Reed in 1953, the group had hits with songs including Smoke Gets In Your Eyes, Only You and The Great Pretender.

Following the replacement of original band members, he was the only singer to appear on all 400 recordings.

Reed continued touring, performing up to 200 shows per year, until last year.

Formed as harmonising street singers in Los Angeles, The Platters were the most popular black singing group of their time.

Reed is credited with coming up with the group's name - inspired by disc jockeys who referred to their records as "platters".

The original line-up included Reed, female vocalist Zola Taylor, David Lynch, Tony Williams and Paul Robi, who went on to have four number one hits in the US between 1955 and 1958.

Reed credited his survival in the music industry to the poverty he experienced as a child.

Growing up in Kansas City, Missouri, he said in his biography he was careful with money because he did not want to assume the group's success would continue.

The Platters continued to record until the late 1960s and tour in various incarnations, with more than 100 different members, until the present day.

The group were inducted into the Rock and Roll Hall of Fame in 1990.