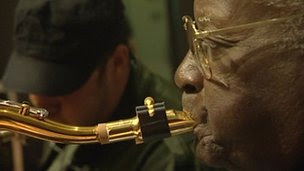 Renowned jazz musician Andy Hamilton has died at the age of 94.

The saxophonist moved to Birmingham from Jamaica in 1949 and was made an MBE in 2008.

He was a regular at the Bearwood Corks Club and continued to perform at venues in the city, including Symphony Hall, until earlier this year.

Alan Cross, who has worked with Mr Hamilton for 30 years, said he had made a "huge impact" on many people's lives, particularly in Birmingham.

Mr Cross added: "Andy played almost every day. If he wasn't playing on stage, he was playing at home with young musicians, with family and friends.

"In the late 80s he went into a coma and we all thought we'd lost him.

"He had this extraordinary vision, while he was in the coma, of Errol Flynn dancing on his yacht to a song Andy had written for him in the 1940s, and he said that brought him out of the coma."

Born in Port Maria, Jamaica, in 1918, Mr Hamilton formed his first band with a group of friends in 1928.

In 1949 he moved to Birmingham, where he formed The Bluenotes.

Despite building up a strong reputation among jazz fans, Mr Hamilton only recorded his first album at the age of 72, which went on to become the biggest-selling UK jazz album of the year.