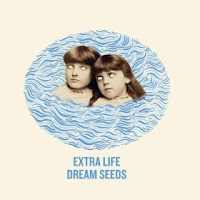 A loose dual-themed concept album dealing with children and dreams means that this third full-length release from Brooklyn’s art-rock provocateurs, Extra Life treads some incredibly dicey ground. The combination of the drawn synthesizer music, Charlie Looker’s church chorister vocal delivery and minimal heaviness sets a sort of gothic tone. The songs switch between the marginally tender and the massively harrowing – a large proportion of the tales centre around the death or abuse of children – which, as you can imagine, makes for a quite horrific and uneasy ride.

The lyrical couplet “The picketer told us, ‘Don’t kill your kid’ / In another world we didn’t but in this one we did” form “Righteous Seed” and “Where is my wooden club? DISCIPLINE DISCIPLINE… / I’ll break your arm boy, your mother’s not around” from “Discipline for Edwin” are as dark as things can get and a brave decision to air on record.

Uncomfortable certainly, but an unusual and captivating listening experience nonetheless, though often one that collides against the general consensus of taste. If you can get beyond this, the pervading message that the damage and wrongs that adults can do to children is an important one. That Looker is a schoolteacher probably connects directly to these dream seeds and likely weighs heavy on his subconscious…. someone psycho-analyse him… he may need help…
www.extralifeband.com
Willsk