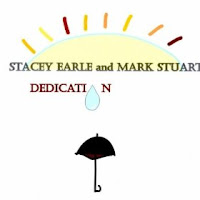 Husband and wife duo Stacey Earle and Mark Stuart play Americana with a style and offbeat precision that’s all their own. From the song material to the finished production, they have four hands in the pot, two minds thinking alike, and one direction to head for. Though Mark takes the lead vocal for the opening title track, Stacey, with her plaintive voice, comes to the fore on "Here Comes The Pain", and the following, er... "Here Comes The Rain", which just ups the pace and continues the song; very similar tune, different words and tempo. It's an interesting idea, and they carry it off with some panache, especially as Mark then takes on the vocal duties for the next number, "Little Rock" (the radio version is tagged on to the end of the album; no bad thing, as it’s a super track).

And so it goes. Both lyrically and melodically, the songs hold up every time, and the agility of swapped lead vocals, together with their harmonising so well, (as on "If You Change Your Mind") makes it a listening treat. And then you get to "The Flag", a narration of the words with a muted backing, which flies on its own. Done a different way this would be talking blues, but here it’s talking Americana, a beautifully poetic six minutes, chronicling a mother's love, and her worries about her son, as he faces the challenges of growing up, and finally joins the army. If they had closed the album with this it would have left thousands of us sobbing, probably never daring to return. Fortunately for us they place it right smack dab in the middle, where we can press the pause button, wipe our eyes, and once recovered continue with the rest of the album, as the remaining songs are every bit as perfect as their predecessors.

I am not that familiar with their previous work, but I shall be soon, and that's a promise. I've missed out on this husband and wife duo for far too long already.
www.staceyandmark.com
Kev A.