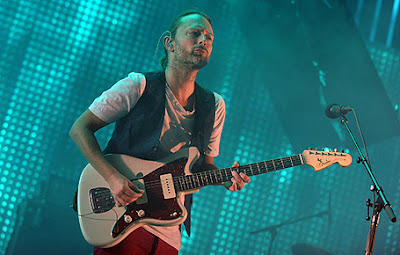 Radiohead have postponed part of their European tour, following a stage collapse in Toronto which killed a crew member and injured three others.

A statement on the band's website said the group were still "dealing with the grief and shock" from the accident which killed technician Scott Johnson.

The collapse caused serious damage to equipment which would "take many weeks to replace", the statement continued.

Seven shows in Italy, Germany and Switzerland have been postponed.

The band will resume their tour on 10 July in Nimes. New dates for the cancelled shows are expected to be announced on 27 June.

"Whilst we all are dealing with the grief and shock ensuing from this terrible accident, there are also many practical considerations to deal with," the statement said.

"The collapse also destroyed the light show - this show was unique and will take many weeks to replace."

The band said its backline set-up - a term that refers to amplifiers that typically sit at the back of the stage - had also been seriously damaged "some elements of which are decades old and therefore hard to replace".

Canadian authorities have launched an investigation into the collapse at Downsview Park, which happened last weekend approximately an hour before the band were due on stage.