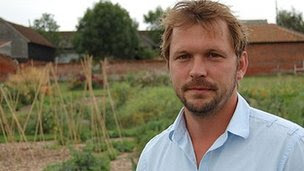 The Olympics has led to many music festivals across England being cancelled with organisers claiming they cannot compete with a summer of sport.

Innocent Drinks has announced on its blog it has cancelled its Olympic festival because of poor ticket sales and competition for people's time.

It follows plans for a comedy and culture festival, which was due to take place near to the Olympic Park over the summer, being put on hold.

The festival organisers said on their Facebook page they are hoping to "rescue" the event.

The annual Harvest Festival, which was held on the farms of Blur bassist Alex James and farmer and presenter Jimmy Doherty, was cancelled after the promoter went into administration.

While James has organised a new event, The Big Feastival, in September with TV chef Jamie Oliver, Doherty said he had decided not to hold a festival because of the Olympics.

A statement on the Jimmy's Farm website said the event would return in 2013, but Doherty and his wife Michaela had decided the focus this year is on the Olympics and the Queen's Diamond Jubilee.

In addition Doherty is celebrating 10 years in farming while the couple are also expecting their second child in July.

Jimmy Doherty said: "It's been a crazy 10 years and we need to focus on the nation's big dates.

"Harvest will be back as the country's best food, music and family festival - but we've got to prioritise this year and make the right decisions for our customers and the farm."

Innocent, which started in 1999 selling smoothies at a music festival, held its first Fruitstock festival in 2003.

In 2007 the festival became the Innocent Village Fete.

A statement on the company's website said: "A busy summer along with a spell of bad weather has meant ticket sales for our Fruit Sports Day festival haven't been as good as we'd needed them to be to ensure a great day out.

"We're sorry for the inconvenience, but we think it's a much better decision to postpone this year and run a bigger and better event in the future."

In January the organisers of the Big Chill Festival said the Olympics had impacted on "artist availability" leading to the cancellation of the event.

The Big Chill has been going since 1994 and has been held in the grounds of Eastnor Castle, Herefordshire.

But bosses said difficulty in booking the acts they wanted and no suitable alternative date meant the festival would not go ahead.

Smaller events have also been affected. In February organisers of the Cowley Road Carnival, an annual community event in Oxford, said the event had been called off to avoid "festival fatigue".

A statement from Cowley Road Carnival said competition from Diamond Jubilee celebrations and the Olympics led to the decision to cancel the 2012 event.

And Middlesbrough's Intro Music Festival was called off after the council's budget was cut.

Middlesbrough Council said it would focus resources on Olympic and Jubilee events instead.

In March rock festival Sonisphere, which was due to take place at Knebworth Park, Stevenage, on 6-8 July, was cancelled with organisers citing "a very challenging year" as the reason for the event not going ahead.