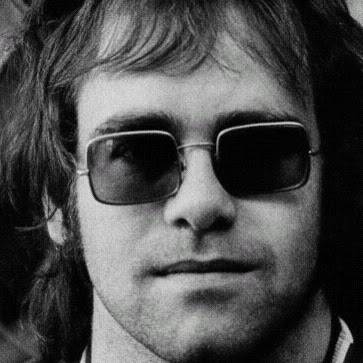 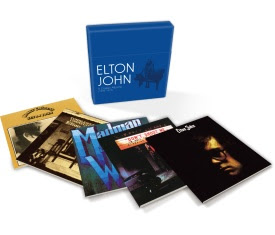 Australian duo Pnau are best known for their side-project "Empire Of The Sun"; Elton John signed the pair after hearing their record, and now with his blessing, a selection of Elton’s old masters will be re-imagined into an album featuring their recreations of his classic songs between 1970 and 1976 many of which can be found on this welcome new box set.

It contains five of Elton John’s quintessential and most acclaimed albums from 1970-1973; Elton John, Tumbleweed Connection, Madman Across The Water, Honky Chateau and Don’t Shoot Me I’m Only The Piano Player. These albums provided the backbone of Elton’s early career and were the source of a series of breakthrough hits which would propel him to become one of the most successful British artists of all time, recognised initially in America where Madman Across The Water made him the first artist since The Beatles to have four albums simultaneously in the Top Twenty.

Elton John was Elton’s second album, released in 1970 and confirming the special relationship between Elton and Bernie Taupin. It was also the first to feature the team of producer Gus Dudgeon and arranger Paul Buckmaster and contained the songs "Border Town" and "Your Song", the latter becoming Elton’s first UK hit, reaching No. 7 in the charts. It set the US charts alight, the album eventually hitting No. 4.

Tumbleweed Connection with its American Old West themes in songs such as "Country Comfort" and "Ballad of a Well-Known Gun" maintained the momentum in Elton’s career and even featured Dusty Springfield on some backing vocals. It included Elton’s wonderful rendition of Lesley Duncan’s "Love Song".

Madman Across The Water followed in quick succession in 1972 and introduced guitarist Davey Johnstone from Magna Carter as another key member of Elton’s band alongside bassist Dee Murray and drummer Nigel Olsson. A wonderfully considered work including the song "Tiny Dancer", it is blessed with lush melodramatic arrangements which perfectly compliment Elton John and Bernie Taupin’s flourishing songwriting partnership. In May of that year, Elton John formally changed his name by deed poll.
Honky Chateau, 1972, a reference to the French recording studios in Chateau Herouville, was Elton’s sixth consecutive album produced by Gus Dudgeon. It returned Elton to the UK charts where the hits "Rocket Man " (a UK No. 2) and "Honky Cat" fully established Elton’s critical and popular appeal on both sides of the Atlantic achieved as result of the combination of his flamboyant showmanship, romantic sensibilities and song craft able to embrace a multiplicity of styles.

Don’t Shoot Me I’m Only The Piano Player released in early 1973, came in the wake of one of Elton’s signature hits, "Crocodile Rock"; also included on the album is the contrasting ballad "Daniel" (both Top Five entries). Don’t Shoot Me… was soon to be the No. 1 one album in both Britain and America (where it was the first of seven consecutive No. 1 albums, in Britain it was the first of four consecutive No. I’s). Although his albums continued to be released by DJM in the UK for the next few years, this was the year in which Elton John launched Rocket Records at a village railway station in the English countryside. At the same time, in 1973 there was no doubting that Elton John become a global superstar.

This collection presents Elton’s nascent talent at the very start of a truly legendary career, demonstrating an unparalleled song writing prowess now re-imagined by Pnau. The songs on the Elton vs Pnau album draw from as many as six different early Elton tracks, adding loops, samples and their own material. Elton himself is a huge fan of Pnau’s work allowing them to create this revolutionary new collection of compositions. Elton’s summer tour of Europe will include an appearance in Ibiza on July 2nd to promote the project with Pnau including the single "Good Morning to the Night".

Elton remains committed to his music and to touring, becoming more, rather than less, busy as time passes. In 2011 Elton returned to The Coliseum, Caesars Palace, Las Vegas with his all-new show, The Million Dollar Piano. In 2012 he returned to the recording studio with producer T Bone Burnett and has toured North, Central and South America before returning to play in Europe.

MADMAN ACROSS THE WATER

DON'T SHOOT ME I'M ONLY THE PIANO PLAYER