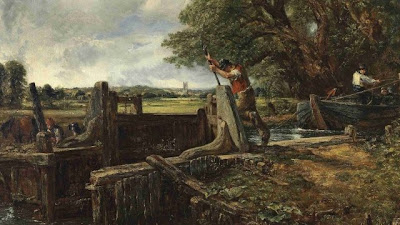 John Constable's The Lock has become one of the most expensive British paintings ever sold, fetching £22.4m at auction at Christie's in London.

The full price of £22,441,250 for the 1824 masterpiece depicting Suffolk rural life places it joint fourth on the list of most-expensive Old Masters.

George Stubbs's Gimcrack on Newmarket Heath, with a Trainer, a Stable-Lad, and a Jockey, fetched the same in 2011.

The Lock had been housed in Madrid's Bornemisza Museum.

Its owner, Baroness Carmen Thyssen-Bornemisza, said it was "very painful" to sell the work but that she had to because she had "no liquidity".

Museum trustee Sir Norman Rosenthal has resigned in protest at the sale, criticising the baroness - known as Tita - for putting one of its prize exhibits up for sale.

In his resignation letter, the former exhibitions director of London's Royal Academy said the decision "represents a moral shame on the part of all those concerned, most especially on the part of Tita".

A former Miss Spain, the baroness is the fifth wife and widow of Swiss industrialist Baron Hans Heinrich Thyssen-Bornemisza.

The Lock was part of the huge private art collection he left behind when he died in 2002.

While most of it was sold to Spain, 250 artworks are still in the baroness's private collection and have been lent to the country free of charge for the past 13 years.

Announcing the sale of the Constable painting in May, the baroness said she needed to sell because of the current economic crisis.

"It's very painful for me, but there was no other way out," she told the Spanish newspaper El Pais. "I need the money, I really need it. I have no liquidity.

"Keeping the collection here is costly to me and I get nothing in return."

Francesca Von Habsburg, the baroness's stepdaughter and another museum board member, has also expressed disapproval over the sale.

"The baroness has shown absolutely no respect for my father and is simply putting her own finanical needs above everything else," she told the Mail on Sunday.

The first owner of The Lock was James Morrison, who bought the painting at the 1824 Royal Academy exhibition.

The son of an innkeeper, Mr Morrison became one of the wealthiest British merchants of the 19th Century and a prolific art collector.

The Lock remained in the possession of his descendants until 1990.

The top end of the art market has escaped many of the problems faced by the wider global economy, with new records consistently being set for individual artists.

In May Edvard Munch's The Scream became the most expensive art work ever sold at auction, selling for $119.9m (£74m) in New York.

The top price for an Old Master was reached in 2002 when Sir Peter Paul Rubens' painting The Massacre of the Innocents sold for £49.5m.