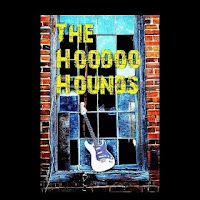 From Clemson, South Carolina, The Hoodoo Hounds first got together in 2005, recorded a couple of demo discs, but this self titled collection is their first bona fide album release. Fronted by Walt "Hoodoo Harry" Ligon, they utilize both the sound and the style of The Blues Brothers, updating the sound a little, though obviously drawing on many of the same influences. Ligon possesses a fine blues voice that will surely draw comparison to Howlin Wolf, Don Van Vliet (Captain Beefheart) and even Tom Waits. It’s the sort of growl that gets you reaching for your pint mug in case the floor starts moving. He shares the vocals with Matt Huddleston, and the contrast between their two styles adds considerable light and shade to the proceedings.

The record begins with “Crossroad Blues”, a killer riff accommodates a succession of blues motifs, from black cat bones to mojos and, of course, a midnight meeting at the dreaded crossroads. It sounds clichéd and it is, but the band lay down such a groove, it’s nigh on impossible not to be swept along by their enthusiasm. I think my favourite is “Millennium Blues” where Ligon drawls, rasps and shouts over gurgling keys and a finely picked guitar, though the rest of the band are hardly shrinking violets, and whenever they hit their stride, a smile is never far away from the listener’s lips.
www.hoodoohounds.com
www.facebook.com/hoodoohounds
Rob F.